A dramatic landscape of orange and purple rocks, much-loved by science-fiction film-makers. The mountain has been mined for copper and other minerals since Roman times. Some consider it derelict land, others a giant earth sculpture! Public footpaths cross the site and there is on-site interpretation/information by the Amlwch Industrial Heritage Trust. The sulphides in the rocks produce very acid conditions (and very acid waters in the Afon Goch "red river" - actually two rivers which flow north to Amlwch and south to Traeth Dulas) and this and the highly toxic metals still present in the ground result in a very sparse and specialised flora able to tolerate these demanding conditions. Rinsing equipment and footwear in freshwater afterwards is recommended! 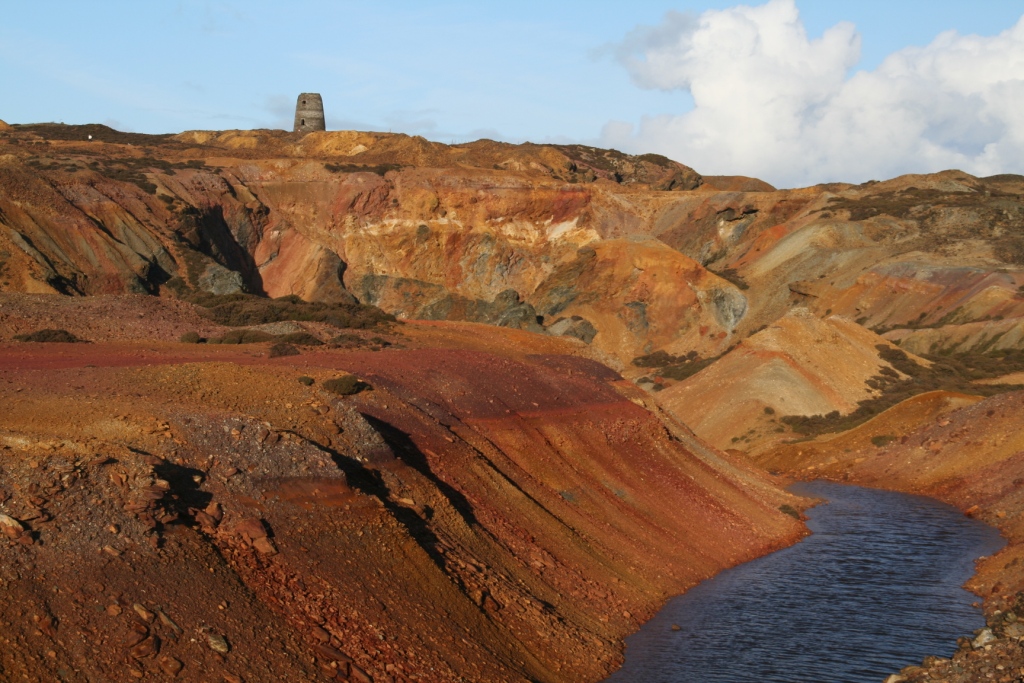 The fantastically colourful landscape of Mynydd Parys, , bears witness to a time when the area was globally important for mining. At the end of the 18th century, Mynydd Parys was the largest producer of copper in the world, producing more than 3,300 tons of ore every year. It has been estimated that over 130,000 tons of copper were extracted from the ore mined at Mynydd Parys.

Mining began here in the Bronze Age and copper ingots have been found that bear Roman inscriptions. Large-scale extraction began in the 1760s following the discovery of a major ore-body known as the Great Lode. The North Discovery, Golden Venture, Carreg-y-doll, Charlotte’s and Morfa-du lodes were subsequent discoveries. Initially, the ore was worked at the surface and then in opencast pits, before deeper deposits were exploited by means of shafts and adits. As is the case with the remains of other Welsh mines, the Great Opencast bears witness to the human endeavour that was expended in extracting the copper in this area, under conditions that are hardly imaginable today.

It was difficult and dangerous work, and contemporary visitors referred in awe to the steepness of the shafts and the agility of the miners. Those who kept their footing were in danger from falling rocks and the gunpowder used to blast the ore. Women and children did not work down the mines, but above ground; ‘copper ladies’ used hammers and knock stones to separate the valuable copper from the waste rock - not a pleasant job but probably better than the conditions underground, despite the noxious fumes from the kilns used to smelt the copper. Famous visitors included Michael Faraday, whose 1819 diaries refer to the ‘noble roar’ of the gunpowder blasting.

The acidic waters of Mynydd Parys are rich in metals and it was discovered that purer metal (although in small amounts) could be obtained efficiently from drainage water using direct precipitation of copper onto scrap iron placed in purpose-built ponds. The mineral-rich water was also much in demand by local farmers to treat foot rot in sheep.

The mining industry was so important that the area even had its own coinage to pay the workers; the ‘ penny’, struck in the mine’s own copper, was first minted locally in 1787. These tokens, which were made in various forms until 1817 (and even generated forgeries), are now highly collectible. Halfpennies were also made and it is estimated that over 10 million coins were issued.

Other industries linked to the copper mining on included sulphur and sulphuric acid manufacture, fertiliser and ochre and paint pigments. Mynydd Parys had been largely worked out by the 1890s and production ceased in 1911.

The copper, lead and zinc mineralization at Mynydd Parys occurs in zones found in volcanic rocks and deep-water mudstones of Ordovician and Silurian age, rather than in veins, as is often seen in other mineral deposits. Although its origins remain the subject of much debate, the deposit is believed to have formed as a result of exhalation (outpourings) of metalliferous brines on the Ordovician sea floor during volcanic activity some 450 million years ago.

The primary minerals found at Mynydd Parys are pyrite, galena, sphalerite and chalcopyrite. The site includes a wealth of secondary minerals that have developed through the weathering and decay of the primary minerals. Many of the secondary minerals are very rare, including anglesite which was named after the island of Anglesey and first described from Mynydd Parys. Mineral exploration continues today at Mynydd Parys, and resources are estimated at 6.5 million tonnes. These are chiefly copper and zinc ores, but also significant quantities of lead, silver and gold.

Parts of Mynydd Parys are designated as a Site of Special Scientific Interest. This recognises not only the geological significance of Parys Mountain, but also its unusual botany; rare lichens and other specially adapted species have developed on the harsh substrate.

Map reproduced by permission of Ordnance Survey ® on behalf of the Controller of Her Majesty's Stationery Office. © Crown copyright. All rights reserved. License number 100044910.